A month ago and a bit ago, I was returning from a week in New York City, where I’d met up with friends new and old, with diverse backgrounds but we came together for one purpose – to meet and share even more stories.

New York fascinates me endlessly. It wasn’t my first time in the city – that was October 2009, though that time was very limited and very focused. This time, my time was mostly my own – except for a day or so – and so I ventured out into the metropolis. There is so much to do and see that one can fill up their day with all kinds of new adventures and still have a lifetimes worth of things to explore.

I grew up in a moderate-sized maritime city in my home province of Newfoundland. I’ve always been a city girl – the inner explorer in me always itching to get out and see what else there is to see or do. I’m adventurous, but with a healthy dose of self-preservation and a sense of being aware of what’s around me. I’m pretty good in figuring out directions, and if it’s not immediately apparent, there are also maps. As Manhattan is mostly made up on a grid, it makes things much easier to travel (at least for a pedestrian walking and using public transport).

I’d arrived in the city by train late in the evening and took a cab the first night to the hostel where I was staying up in Harlem. The next morning, after a phone call to a new friend, Jill Hurst, I headed down to get a Metrocard and spent the day in the city just exploring – on a rainy day. Though that didn’t dissuade me in the slightest. After a bunch of walking around, I ended up at Pier 78 at the New York Waterways terminal. The following pictures were taken over the course of the week in the city.

Looking above at the Brooklyn Bridge from the New York Waterways ferry, it left me with a wonderful impression of magnificient architecture. When I return to New York this summer, I hope to be able to walk the bridge. 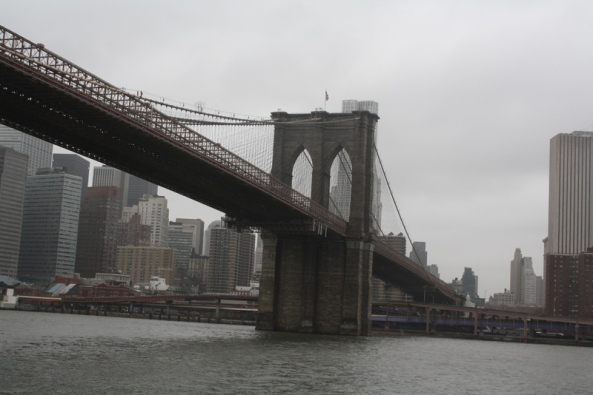 The first time I saw these tall ships at the South Street Seaport was when I had come to New York in October 2009. My friends and I took a walk down to the Seaport and got a chance to see the ships up close. Unfortunately for me, my camera battery was nearing the end of its battery life at the time, and I was unable to get some lovely close-up shots. Mayhaps another time.

Spring on a sunny day is one of my favourite times to take pictures, especially after the snow goes and the ground is just starting to come alive. The trees have yet to bud, and you can see a myriad of things just peaking through.

Two friends, Denise and Donna, and I had gone for a walk one evening while we were in the city this time, and we headed around Rockefeller Center, towards the skating rink. The lights, the trees lit with lights, the atmosphere was full of laughter coming from the folks who’d decided to head out onto the rink, and fellow tourists who had come to see the sights.

Over-looking Central Park from the Top of the Rockefeller Center is an experience that I quite enjoyed. In a city built of steel, brick, mortar, wood; the buildings standing tall and proud, and amidst that, small parks scattered through the city. When I was a child and into my teens, I remember seeing televised concerts of Simon & Garfunkel on PBS filmed in Central Park. The span of the park looked huge to a child’s eye. As an adult, looking over the park, it still keeps an aura of magic and possibilities, of fields for play and adventure, quiet spots to read or people watch, changing and evolving. 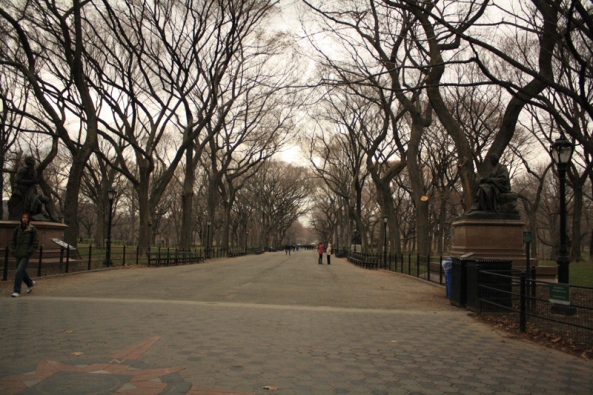 As I mentioned above, there are many things to see and do in New York City. Some don’t cost more than the cost of a Metro Transit Authority ticket, a good pair of walking shoes and a lot of imagination.

One comment on “Getting found in New York City”