Today marked the final day of our tour through Scotland’s Outer Hebrides, as we left the Isle of Skye behind and moved back onto the Scottish mainland. Where we arrived in Uig by ferry a couple of days ago, today we were headed down the eastern road along the Inner Sound, passing by the islands of Rassay and Scalpay as we went towards the Skye Bridge over to the mainland.

The bridge connects over the sound between the villages of Kyle of Lochalsh on the mainland and Kyleakin on the island, and was built from 1992-1995 when it opened. There had been a toll on the bridge of £11.40 (return trips) for a short time before it was cancelled due to heavy protests that it was the most expensive road in Europe and non-payment by residents. In December 2004, the bridge was bought for £27 million and tolls immediately ceased. The image below shows the segment from Eilean Bàn (where there’s a support structure for the bridge between Skye and the mainland.

We drove down to Eilean Donan Castle, to visit and take photographs. I visited here when I was in the UK seven years earlier but it’s still pretty impressive. The castle is strategically situated at the head of three lochs – Loch Alsh, Loch Long and Loch Duich and was built as a defence against warring clans and nations. The original medieval structures were built in the thirteenth and fourteenth centuries. By the end of the 15th century, however, the castle had been reduced to 538 square metres. In the 16th century a hornwork was built with a hexagonal bastion and added to the east wall.

Like many castles in Scotland that were used as defences, such as Urquhart Castle, Eilean Donan Castle was destroyed in 1719 when it was bombarded by English ships against the Jacobite stronghold and Spanish soldiers who were helping the Jacobites. The castle sat in ruins for nearly two hundred years before being rebuilt by Major / Lt. Col. John McRae-Gilstrap and Farquhar MacRae over a twenty year period. Rumour has it that the architect had received the blue-prints of the original castle in a dream and devised the rebuilt castle from these plans, and when the original blueprints were found at Edinburgh Castle from a survey of the property just five years before its 1719 destruction, it was determined that the newer blueprints for the castle to be very close to the original. It cost £250,000 to build and was formally completed in 1932. The Billeting Room’s walls are 4.26 metres (14 feet) thick. Visitors are unable to take photographs inside, but if you’re interested, the official Eilean Donan Castle site offers a virtual tour through the grounds. The following are photographs I took on and around the castle grounds. 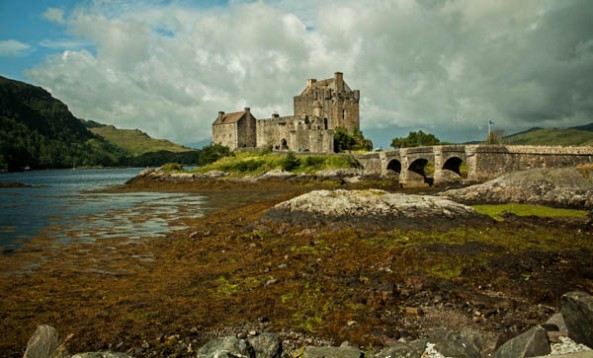 Before we left, I went into the gift shop to pick up a few things (music, a t-shirt, some postcards and stamps), and just as we were leaving, there was a little sprinkle of rain coming down, but it didn’t last too long as we moved further south-east and stopped in Fort William for a lunch break. Several of us went together to a pub that had some really good food before meeting up again in The Parade area in front of the Duncansburgh MacIntosh Parish of the Church of Scotland. 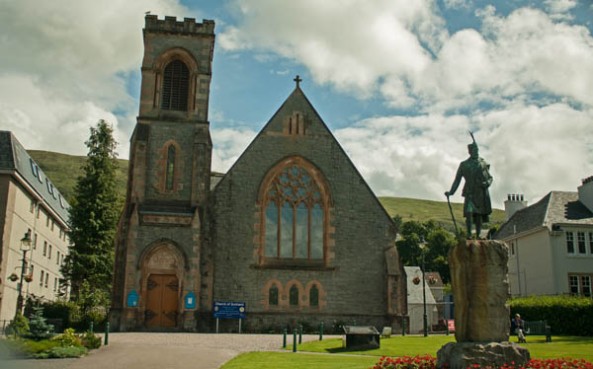 From here we returned to the area of Glencoe and Ballachulish that we’d passed through on the first day of our trip. I’d remarked, amusedly, that a friend of mine who lives in the area was actually visiting Canada at the same time I was visiting her hometown area.

The area shown in the pictures below are of Bidean nam Bian (The Three Sisters of Glen Coe) just south of Glencoe, are a part of three ridges that extend into the glen.

We stopped off for a little break as we headed down through the Trussochs and down to Stirling and as we went south the sun had come out and was really quite nice. We stopped not far from Stirling Castle to take some photos – from a different angle than from the long distance shot I took from the Wallace Monument ten days earlier. This was our final stop before heading back in to Edinburgh where we were being dropped off at Waverley Bridge. Thea, one of my trip companions, and I were staying in the same area but not the same hostel, so we headed to our respective places and agreed to meet up a little bit later to go grab some supper.

As usual for my trip – except for a couple stops – my accomodations had me on the third floor of a hostel. Old building, no elevator. Luggage. Anyway, as my train was to depart really early the next morning, they didn’t charge me the room deposit. They also pre-ordered a taxi ride for the morning to take me to the train station, which I gratefully appreciated. I deposited my stuff in the room I was staying and headed out to meet Thea. We had a wonderful dinner before we parted ways and I headed back to the hostel to get ready for bed and make sure all my stuff was packed.

The next morning came really early, as I mentioned, and it didn’t take me long to get dressed and carry all my stuff down three flights of stairs and drop my key off at the hostel office mail slot. The cab driver dropped me off at the platform level, and I’d forgotten about going up stairs to the main station offices to get the actual ticket – I had my payment confirmation slip with me, but at least the train operator let me stay on board…thankfully, since we were already past Edinburgh when he came round. I got into London about 11:30am-ish, then the Tube over to Victoria station and another train over to my cousin’s in Epsom. I was beat. But not too beat to go meet up with a friend in London that afternoon. 🙂